Integrating a real brand into a popular game

Scroll down
How to postpone the project for some time, and then get it in time and implement it in the best possible way

THE RIGHT IDEA AT THE RIGHT TIME

Every month, more than 150,000 unique users interact with the 1xBet product. A huge number of GTA players become real customers of the bookmaker.
We have developed a concept of cooperation in a completely new market — we used game mechanics and made a custom brand placement in the  in the GTA 5 game on the servers of the GTA 5 Grand RP project.
1xBet became the first bookmaker integrated into the popular game.

In the summer of 2020, our partner agreements department became interested in the possibility of custom placement of brands on game servers with RolePlay mode.
The idea seemed promising not only for us, but also for the client: full immersion of users in the gameplay makes it possible to personalize advertising and create interesting and exciting collaborations for the audience instead of boring product placement.
For two months we have been exploring the possibilities of a new niche and simultaneously negotiated with developers, but the unreasonably high price and lack of sufficient experience in the industry made us doubt the expediency of both monetary and temporary investments. We discussed the situation with the client and decided to postpone the project until better times.

Established contacts and connections in the industry made themselves felt a year later. In March 2021, we received a much more profitable and timely offer from the developer company for the GTA 5 grand PRIX project.

By this time, our knowledge and capabilities had grown significantly, and the 9 Pandas team, as well as the 1xBet brand were fully ready for the experiment and convinced of its necessity. Negotiations with the developers have begun. We were presented with the project and provided with statistics, approximate coverage, and screenshots. To test the real possibilities of brand promotion through game mechanics, we decided to sign a contract for a trial period of three months.

STEPS OF BRAND INTEGRATION INTO THE GAME

1. Mobile app
We started integrating the brand into the game with the development of an in-game mobile application 1xBet. In the virtual phone of each player for EURO 2020, a bookmaker's application with current sports events, pulled up using the API, has appeared. We have organized the most intriguing matches and divided them into categories and disciplines. The branded 1xBet app accepted bets on real sports. It was a breakthrough. Players got the opportunity not only to test the 1xBet product but also to earn in-game currency.
After posting the app, we followed the dynamics for a while and collected statistics — the players were delighted! The integration showed excellent results, 1xBet approved the contract extension for a year, and we started developing a roadmap.

2. 1xBAR
Next, we suggested creating a separate location on the map, branded under 1xBet. The client liked the idea, and we agreed with the developers on the creation of a virtual building "1XBAR". Players had the opportunity to meet together during important sporting events, drink virtual cocktails from a charming virtual bartender, discuss their predictions, and also discuss what or whom it is better to bet on.

3. 1xCasino
Planning the next step, we monitored what was happening in the GTA "city" and noticed a special activity of users and exciting flows of in-game currency in the casino building. Their players could earn in-game currency by playing hooky from the dusty work of a courier /taxi driver/criminal element.
Simultaneously, a direct competitor of the client also noticed this. However, correctly built working relationships helped us pick up the spot — the developers sold the location to us, and we branded everything in "1xCasino", right down to the dealer's vest. At this moment, the casino brings our client about 150k unique "viewers" and interactions per month.

Both the app, the casino, and the bar "1X" were originally exclusively image tools. But after observing how well they "come in" to the players, the client decided to go further and expand his presence. In addition, 1xBet received a request for monetization of integrations, and we started searching for appropriate opportunities.

4. Conversion of players to the client's website — QR codes
When the spots were "completed" and put into operation, it was time to transfer GTA players (visitors of 1x-locations) to the client's website. But how to do it carefully, without causing hate from people who came to play and relax? Not knowing exactly what the result would be, we suggested 1xBet to add a QR code to the wall of the bar and give it a chance to work.

The conversion rate from click-throughs in registration was about 60%, and from registrations with a deposit - more than 80%. That is just a small group of users who have gone through this difficult journey from clicks to the end. And how many were those who just drove to the client's website and started playing…

So the reputation project became profitable to the client. At the moment, we have planned to place two more QR codes on the walls of 1x locations. 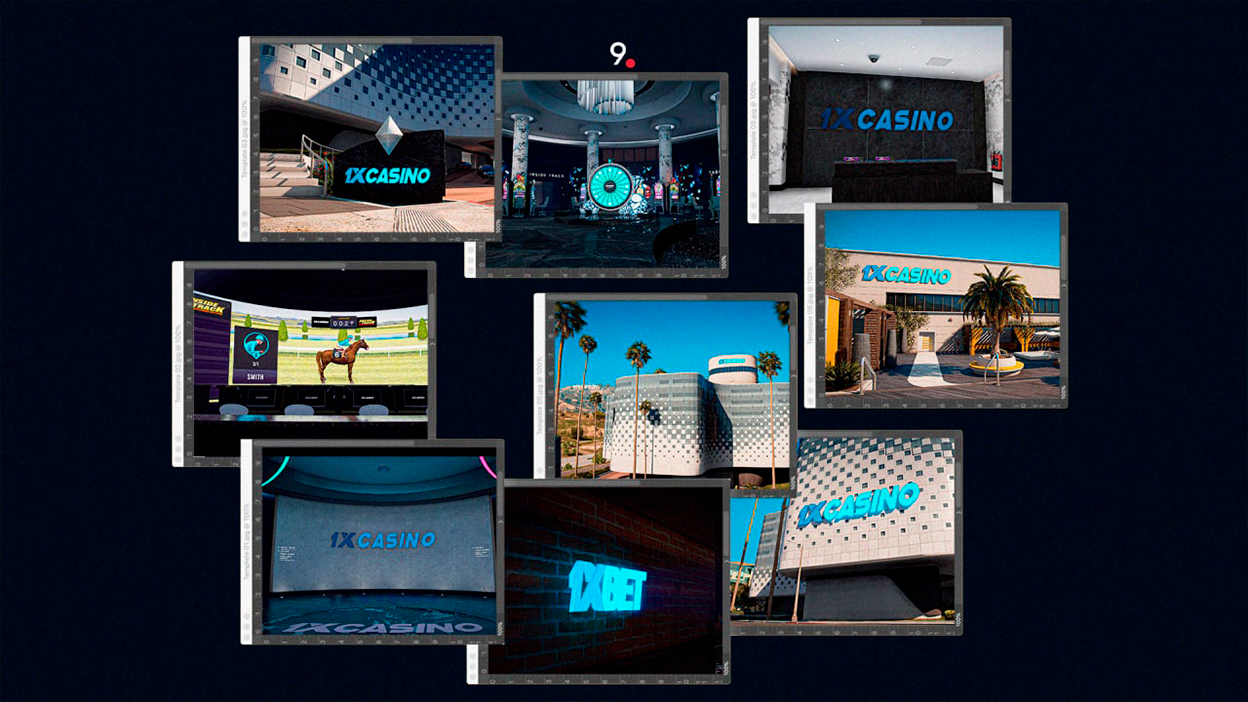 The Future of Advertising

THE FUTURE OF THE PROJECT

GTA 5 has a lot of servers, for the use of which you need to purchase a licensed disc of the game. The existence of servers is beneficial for Rockstar Games (the creators of GTA) since the game is popularized by brands and continues to bring profit to developers even 9 years after its release. A new server is a new audience. Not so long ago, we supported the client's purchase of placing on three servers of the GTA 5 Grand RP project, so we are planning further expansion.

Our Partnership Agreements department has developed many intriguing and unique mechanisms of interaction with the audience for various categories of brands — from automakers to the tobacco industry.

The possibility of integrating real major brands into games has appeared quite recently. We were one of the first to notice and appreciate the enormous advertising opportunities in this segment and were able to convey them to the client. Unobtrusive advertising, native and voluntary communication of users with brands, as well as the opportunity to test company products for free — all of that motivate a huge number of brands to integrate into games today. In a year everyone will be there.