Scroll down
Education // communication in the family // upbringing // entertainment // control

A complex IT product to simplify the life of parents

The IT department of our agency is developing a unique mobile app that helps parents around the world raise children harmoniously.

"First Gadget" is the first mobile app that connects children's virtual environment with real life. This app will turn the child's routine tasks into a fun game, and the funny character reminds them of what is important to the parent. “First Gadget” is a reliable and not boring assistant in raising a child! It offers a system of educational coordinates that is understandable to both the parent and the child.

Visual design, entertaining and intriguing activities, and a non-boring character will motivate children to learn and try new things and replace endless and useless cartoons. In our app, the child will spend time usefully!

All content for children is selected and systematized by a team of professional psychologists working on the "First Gadget" project. They supplement the project with exercises to improve intelligence, concentration, memory, and speech development. These tasks are designed both for the development of good habits and reflection skills and for the emotional intelligence and social adaptation of the child.

This app will be helpful for parents of preschoolers who want their child to learn how to use the gadget as a useful tool. Children from 5 to 10 years old will perform various tasks and quests from the Fox Cub not only online, but also offline.

Accordingly, the project is divided into adult and children parts. The adult interface is concise and functional, while the children's interface is bright and attractive.
For the children's part of the app, we have developed a friendly character - a Fox Cub who will communicate with children in their language, give various interesting tasks, encouraging results, and help the child manage the children's part of the app. In addition to interacting with the child, the character will also ‘live his life’. He is a brave, resourceful, and hooligan, but at the same time reasonable. By this example, the Fox Cub will help the child cope with any fears and difficulties and also turn routine and boring everyday tasks into a fun and exciting game. 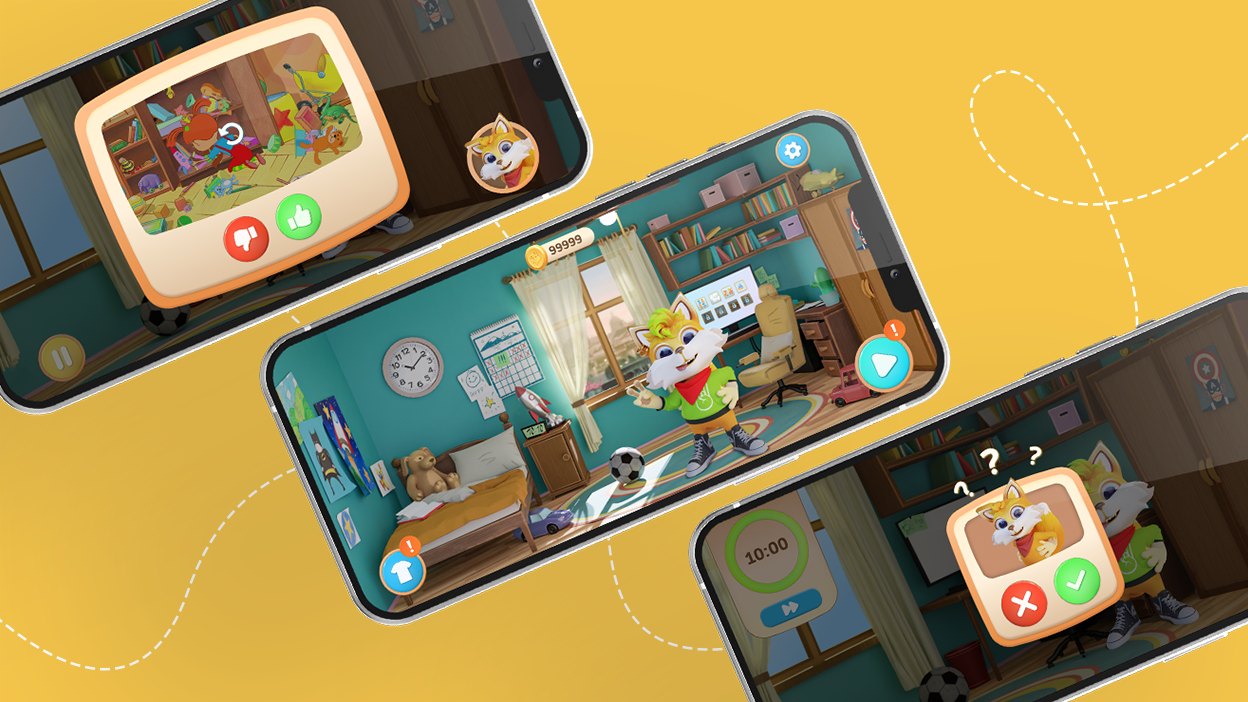 An adult registered in the app creates a profile of a child/several children and gets the opportunity to give them tasks by adding them from the catalog of classes themselves. Next, the parent sets up notifications about the child's completion of tasks and a list of rewards. The app collects statistics and shows the parent in an accessible form what long-term goals are being spent on achieving: one of the app functions is to calm anxious parents by providing them with a tool to assess the leisure and progress of the child.

The child is free to spend the points earned on completing tasks on rewards approved by the parent. For example, as a reward for success, children can get access to cartoons, animated series, fairy tales, and other entertainment content posted on the video platform built into the app.

An adult within the app can:
- give a task to a child (including choosing from the catalog of classes);
- view and select incentives for the child, as well as change the "price" for them;
- confirm that the child has completed the offline task;
- add an event to the child's calendar, including a recurring one;
- view statistics on time spent on achieving long-term goals;
- send a notification about the child's progress to an auxiliary adult;
- redirect the task to another adult who does it with the child and confirms that;
- read and view adult part of the content.

The child receives an application where a character is waiting for him in the room. The character greets him and introduces him to the interface, explaining the control of the application through interactive objects in the room.

The child within the application can:
- communicate with the character and play mini-games;
- complete tasks and accumulate points;
- send photos, audio, and videos as a report about the results to an adult;
- buy various online and offline promotions in the "store", enhancing the character and consuming entertainment content;
- take selfies with the character.

The app is developed for tablets and smartphones based on Android and iOS. We plan to monetize the application through a paid subscription.
Gamification (made in 2D side view; the character is in 3D), includes a reality simulator with a plot component. The child and the character interact, as well as tasks that an adult gives to a child in different forms, and a "shop" where the child changes his points for rewards. In addition, the project is equipped with several mini-games to keep the child's attention.

To date, we have developed an assistant character, the interface's visual design, games, tasks, and interactivity, as well as the concept of rooms for classes. The Android version of the app is under development. Upon its completion, we plan to start adapting the project for iOS.
The first telegram bot will be released for parents with notifications about the tasks completed by the child offline, as well as sending out interesting content (including those created by the child)

In the autumn of 2022, we will present the "First gadget" application in Russia, and from 2023 we will begin promotion on the European market.

Mobile app for clubs // for sponsors // for fans
IT