Tell us about your project, and we will be happy to join in in at any stage

Tell us about your project, and we will be happy to join in in at any stage

9 Pandas developed and implemented a strategy of improving 1xBet brand presence in Africa — 1xBet sponsored Africa Cup of Nations (AFCON) whose matches were held in Egypt. This strategy called «Everyone has a chance» has allowed 1xBet to reach an audience of 343 million people (Nielsen, 2019) and increased a positive public attitude — result of affect heuristic (Kahneman, 2017). The partnership agreement which provided offline, digital and TV presence of 1xBet was concluded by our sponsorship department.

AFCON matches were held at 6 stadiums on which we placed 1xBet advertisement: we used the CDA (Commercial Display Area), prepared stands with photo zones, frames with refreshing water — summer in Egypt is hot, and organized the work of mascots. The main matches and the final of the Cup were held at the Cairo International Stadium where we additionally used the 1xBet drums and played the Spin & Win game in which more than 3.5 thousand people took part. The fans spun the virtual wheel and received prizes and we collected their contact information which we then used for other 1xBet activations. Also, we stylized Cairo airport as 1xBet: pasted over escalators and travelators 1xBet logo, placed transparent branded boxes with money on baggage claim tape and again attracted 1xBet mascots.

For digital activation of the sponsorship contract we developed three mechanics using social networks of 1xBet and the Confederation of African Football (CAF) — organizer of the Cup matches. The first mechanic «1xBet Archives» has been showing video fragments of matches from previous AFCON seasons on Facebook and Twitter accounts of CAF. 1xBet was mentioned in the text of the posts and as a presented partner at the beginning of the video. The second mechanic «Goal Of The Day» has been showing the best goal of each game day of the current AFCON draw on Facebook, Instagram, Twitter and YouTube of CAF. 1xBet brand was again mentioned in the text of the posts. The third mechanic «AFCON Match Predictor» has offered fans to leave free predictions on the outcomes of matches on a specially created site stylized as 1xBet one. Fans received points for correct predictions and took part in drawing valuable prizes at the end of AFCON. The user with the highest total of points received an iPhone XR and a jersey with autographs of the winning team, users in second and third places got Samsung Galaxy smartphones. Additionally we drew 14 official game balls and 38 takedown version balls. The promotion was spread via Facebook and Twitter CAF. The digital activation of the sponsorship contract was carried out in English, French and Arabic.
Digital activation results: 241 publications, involved — 1.3 million, video views — 3.5 million, impressions — 26.7 million. 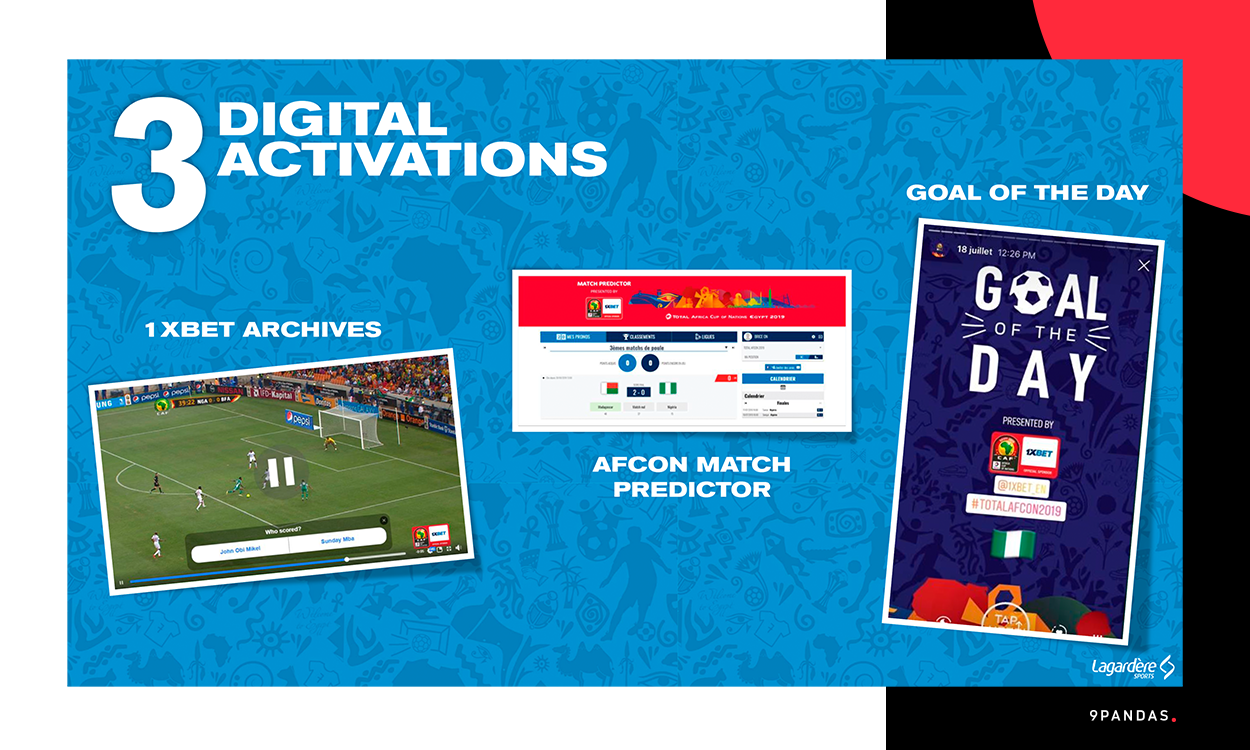 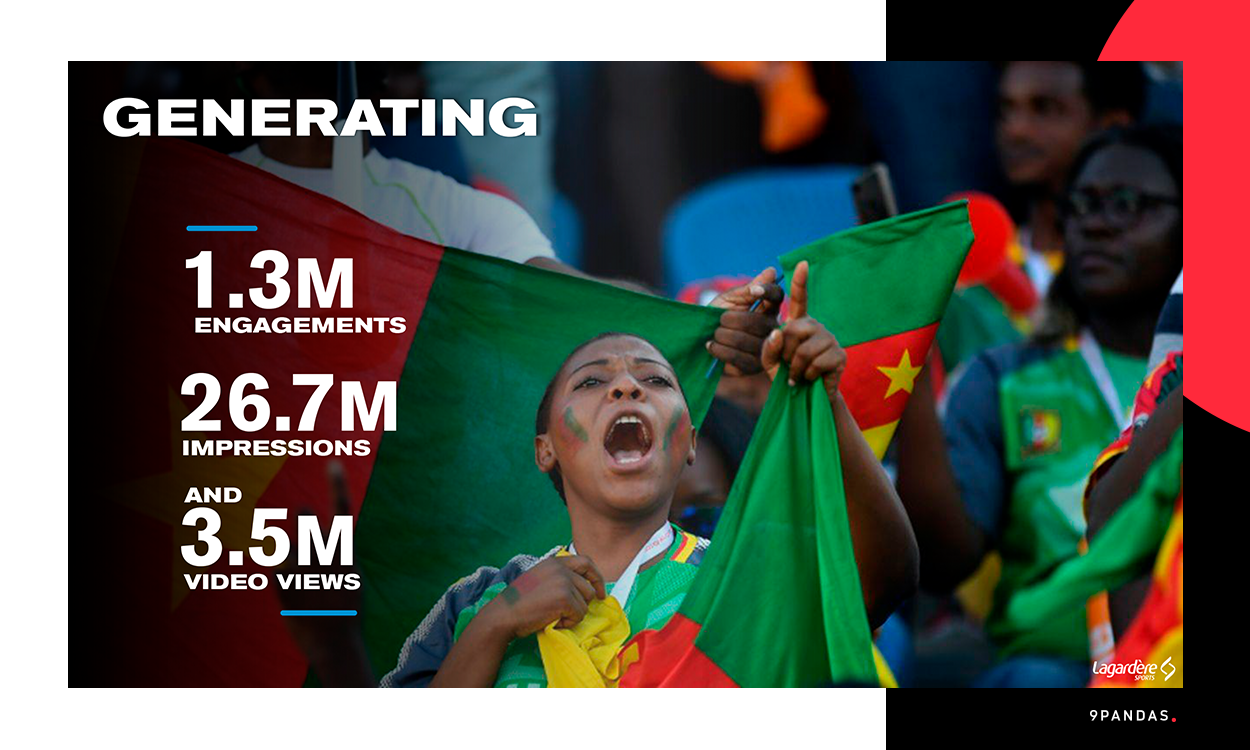 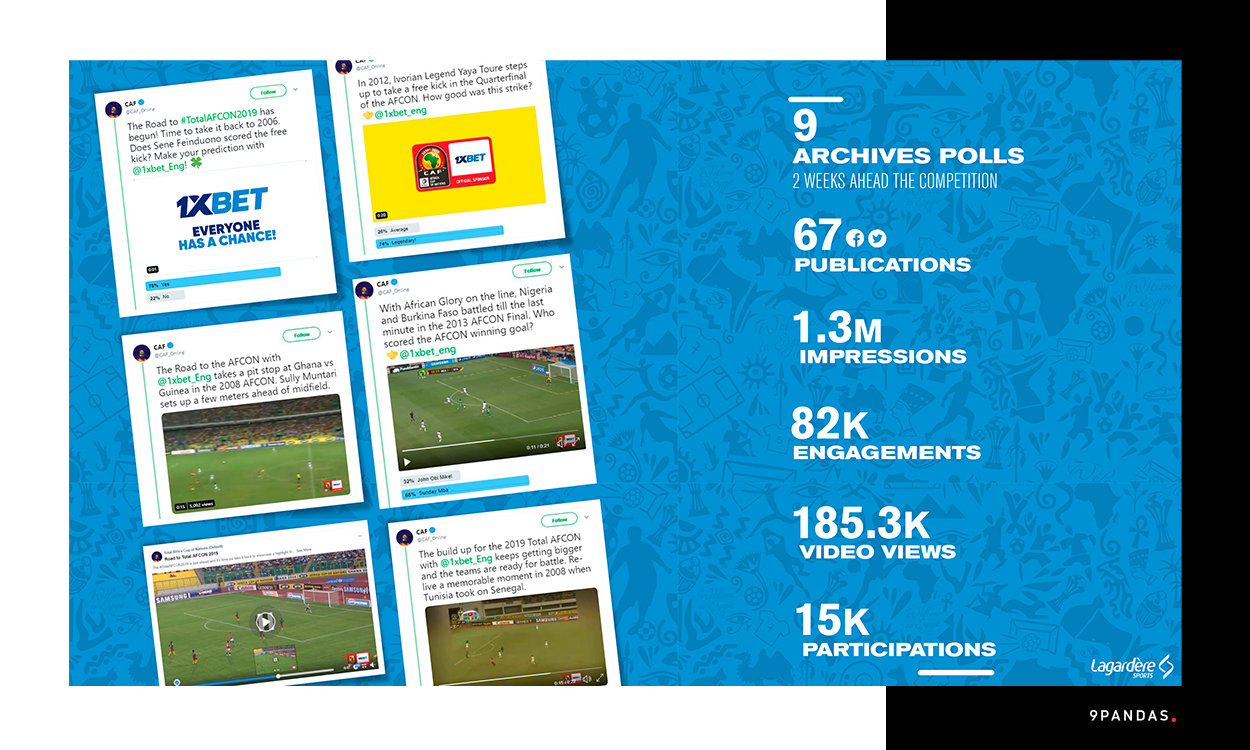 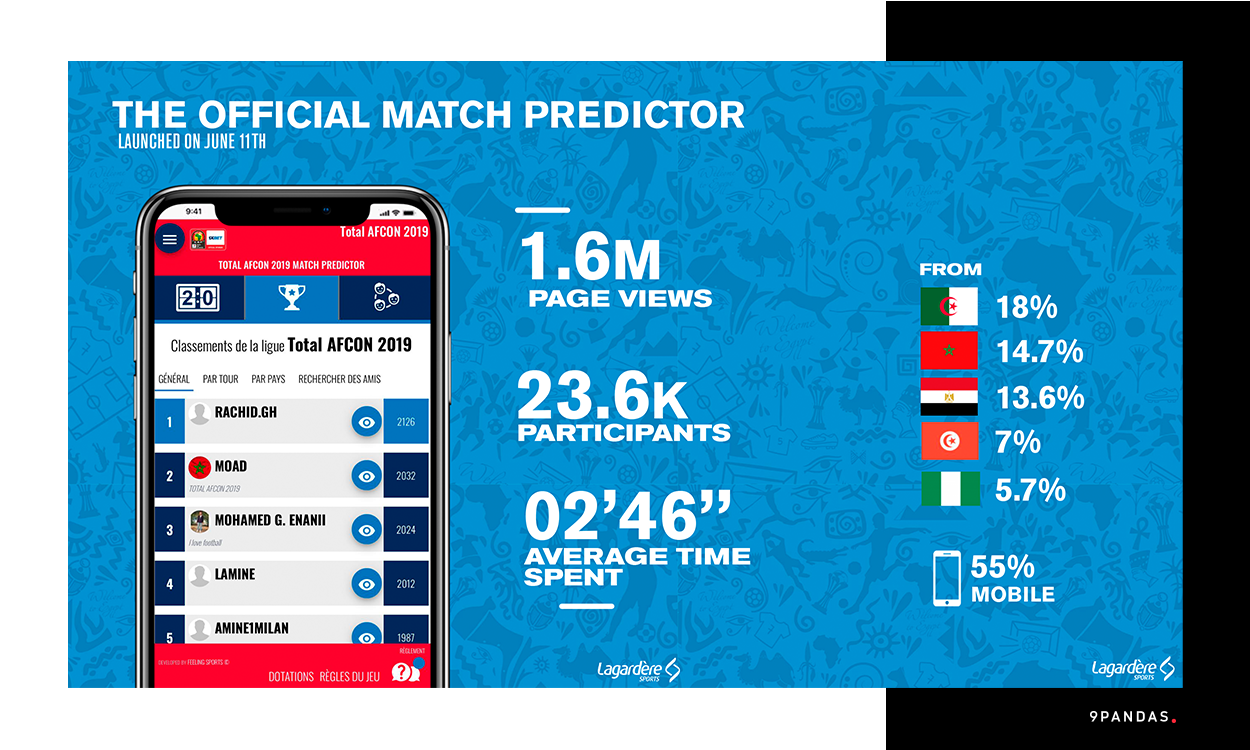 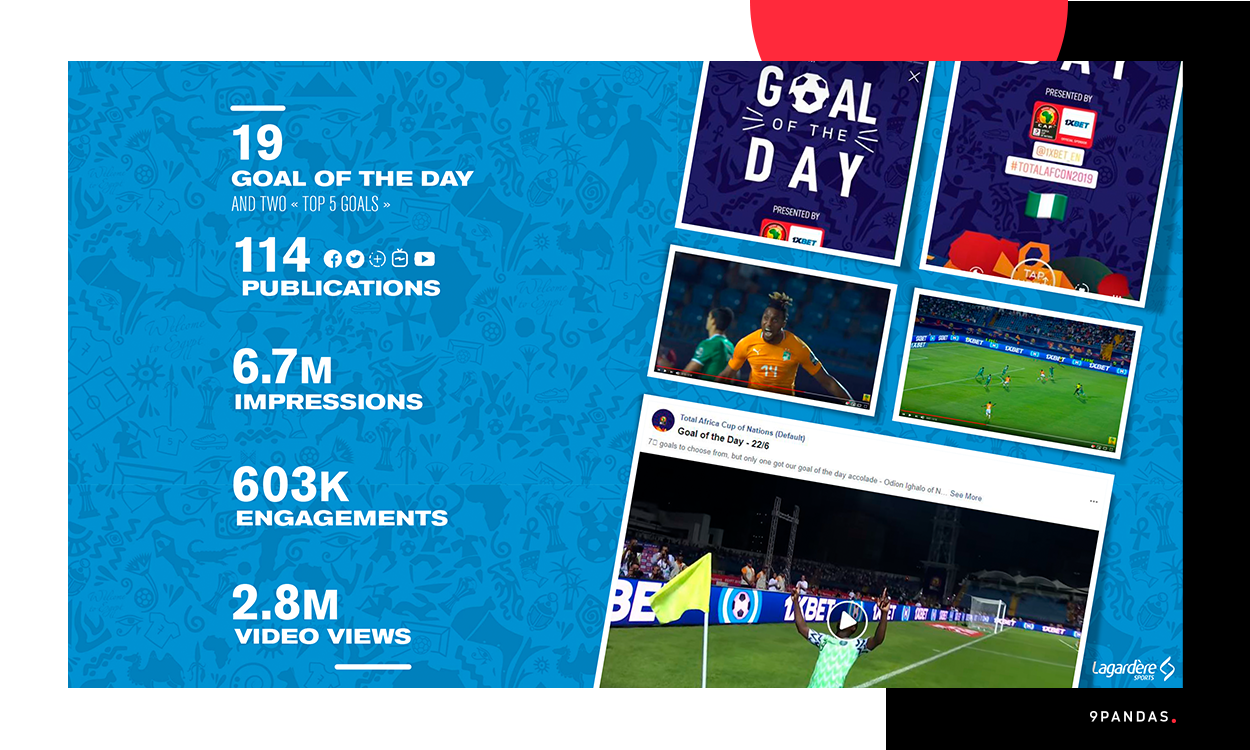 TV activation was multiplane: we used 3D carpets and LED panels, integrated the 1xBet logo into demonstration of starting line-ups of the teams and into the displays of statistical information about matches and posted our commercial «Everyone has a chance» on beIN Sports, MENA, Canal +, SuperSports and Sub-Saharan TV channels. In total 3D carpets gave 16 076 hours of the 1xBet brand impressions, LED panels — 8 070 hours, integration into the demonstration of starting lineups and statistical information displays — 805 hours. The «Everyone has a chance» commercial was broadcast before the start of matches and during breaks to an audience of 208 million people. 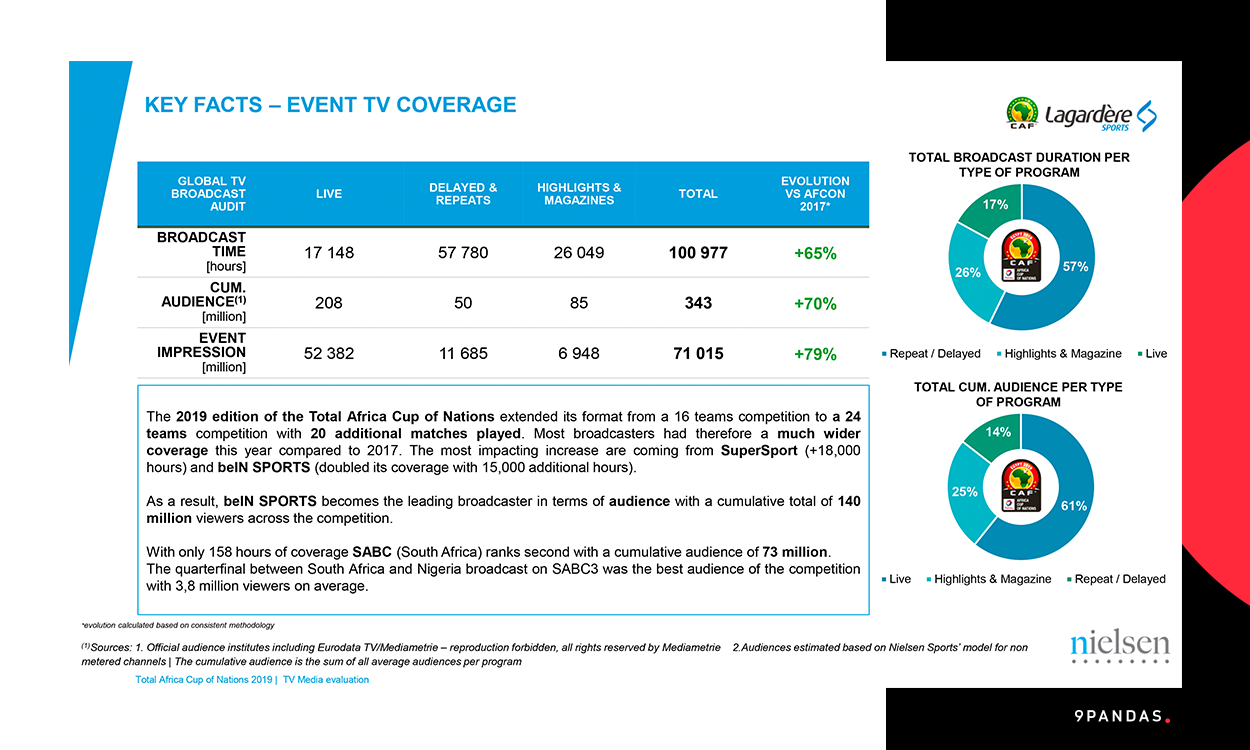 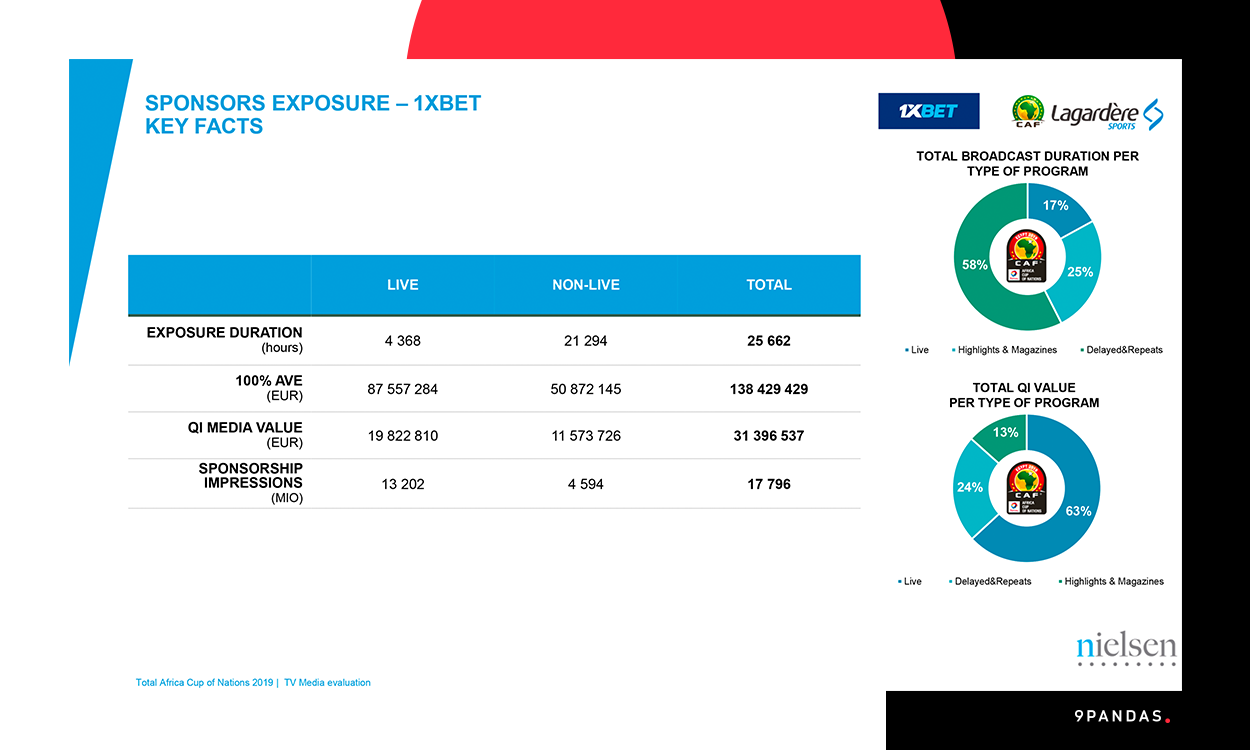 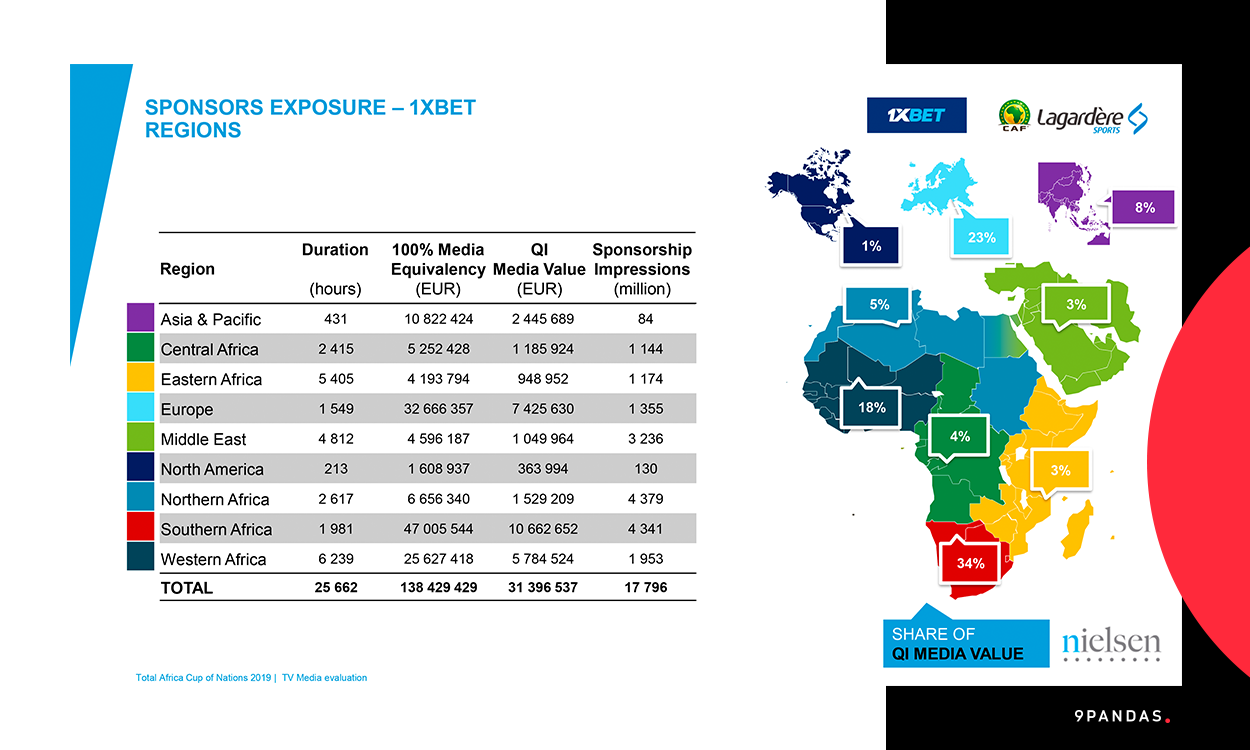 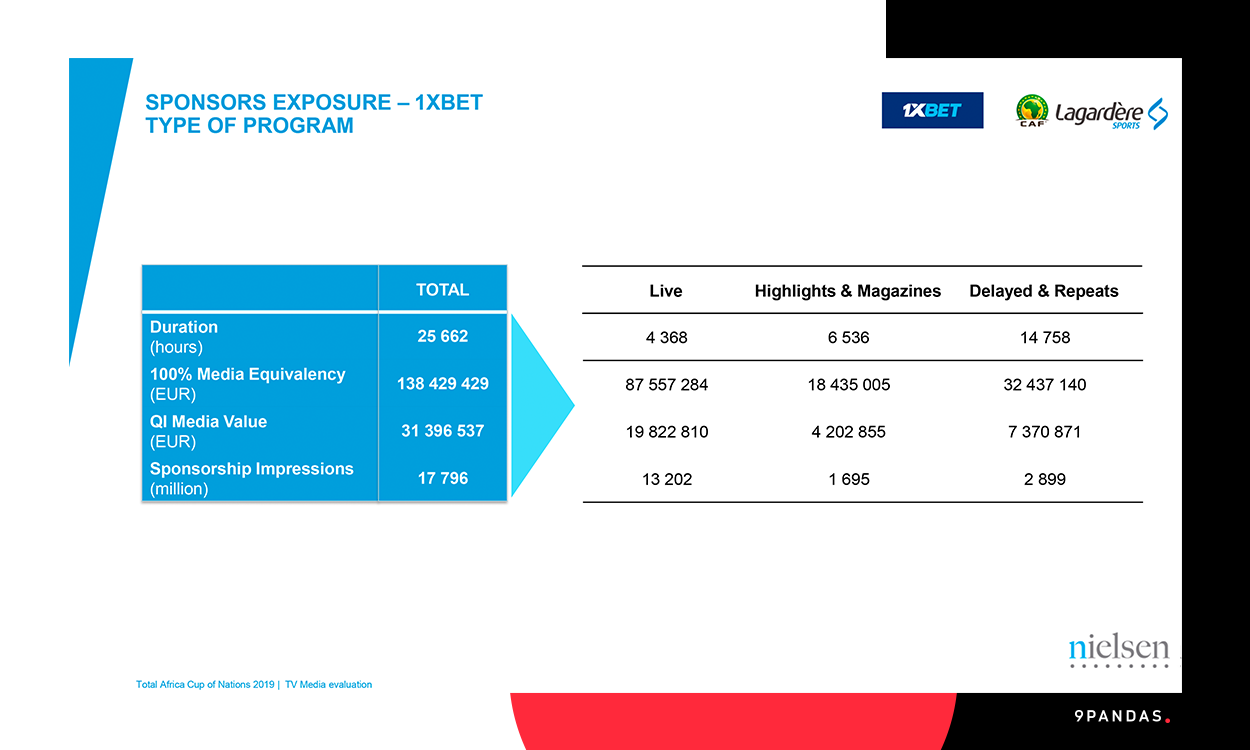 To unite, not separate

More about "Everyone has a chance"

African macro-region is characterized by a cultural, ethnic and economic multi-component structure leading to tensions between countries. In this situation 1xBet acted as a mediator who increases the level of social trust and unites heterogeneous communities — co-creational approach in marketing (Szondi G., 2010). The «Everyone has a chance» commercial is part of the socially oriented strategy of 1xBet and shows the idea of a consensus alliance around football. Its sound theme became a drum beat which is universal for Africa and corresponds to the 1xBet brand using drums in marketing communications. The shooting took place in Moscow. The actors were chosen from each AFCON member country.

Outpost of 1xBet in Africa

The sponsorship of AFCON'19 allowed the 1xBet brand to reach a pan-African audience of 343 million people. Matches were held in Egypt — the bookmaker more focused reached an audience of 38.79 million and brought the sponsorship impressions to 2,134 million (Nielsen, 2019). One of the most economically developed countries in Africa with a wealthy population that can afford to bet has become an outpost of 1xBet in Africa. 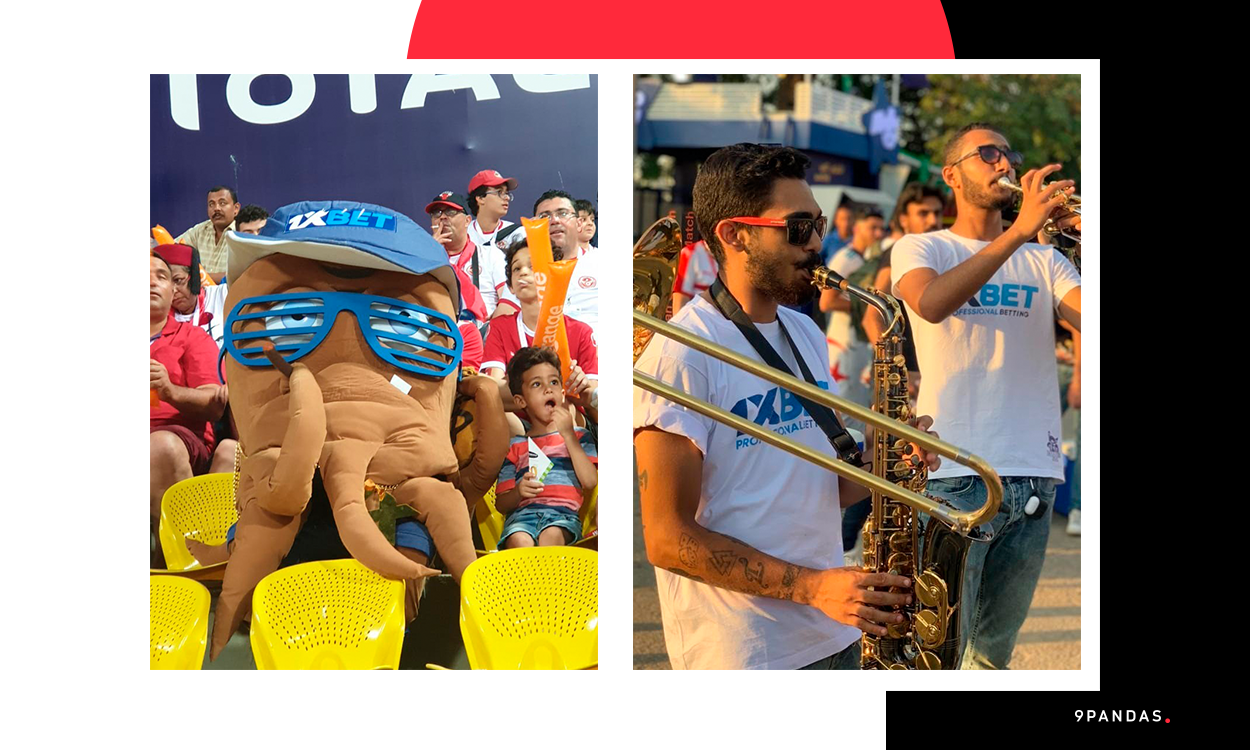 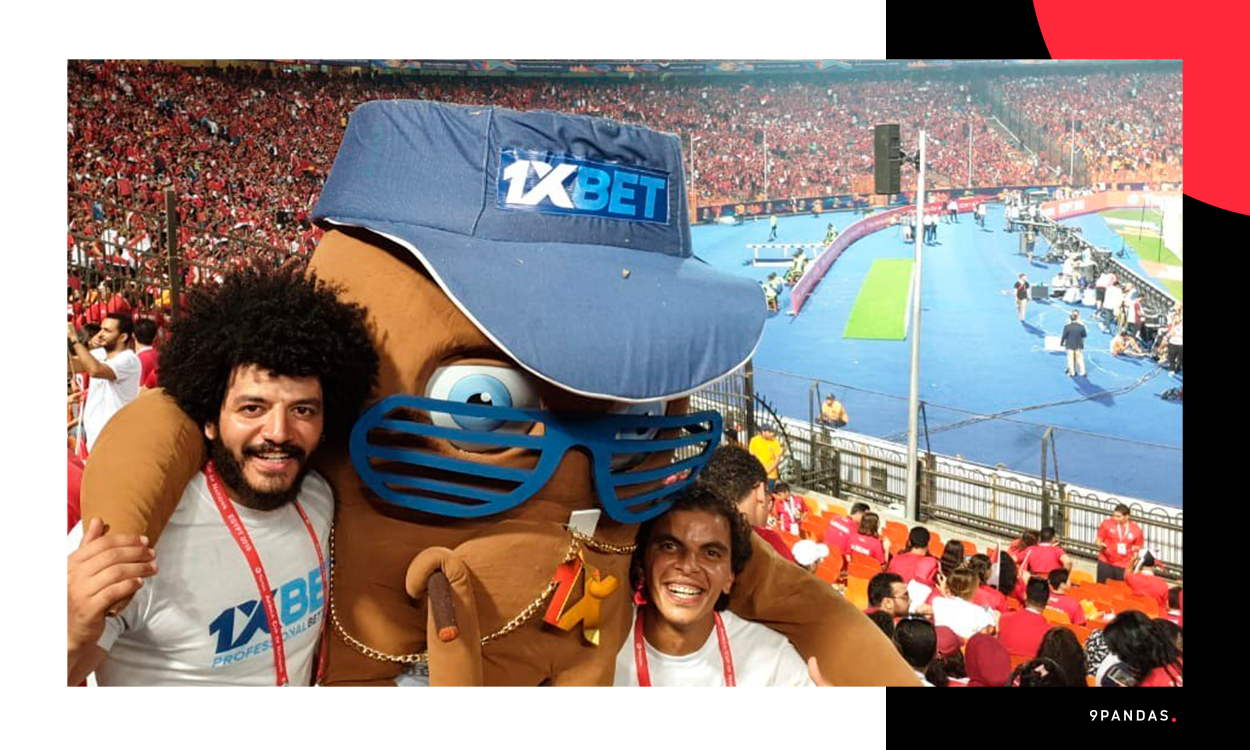 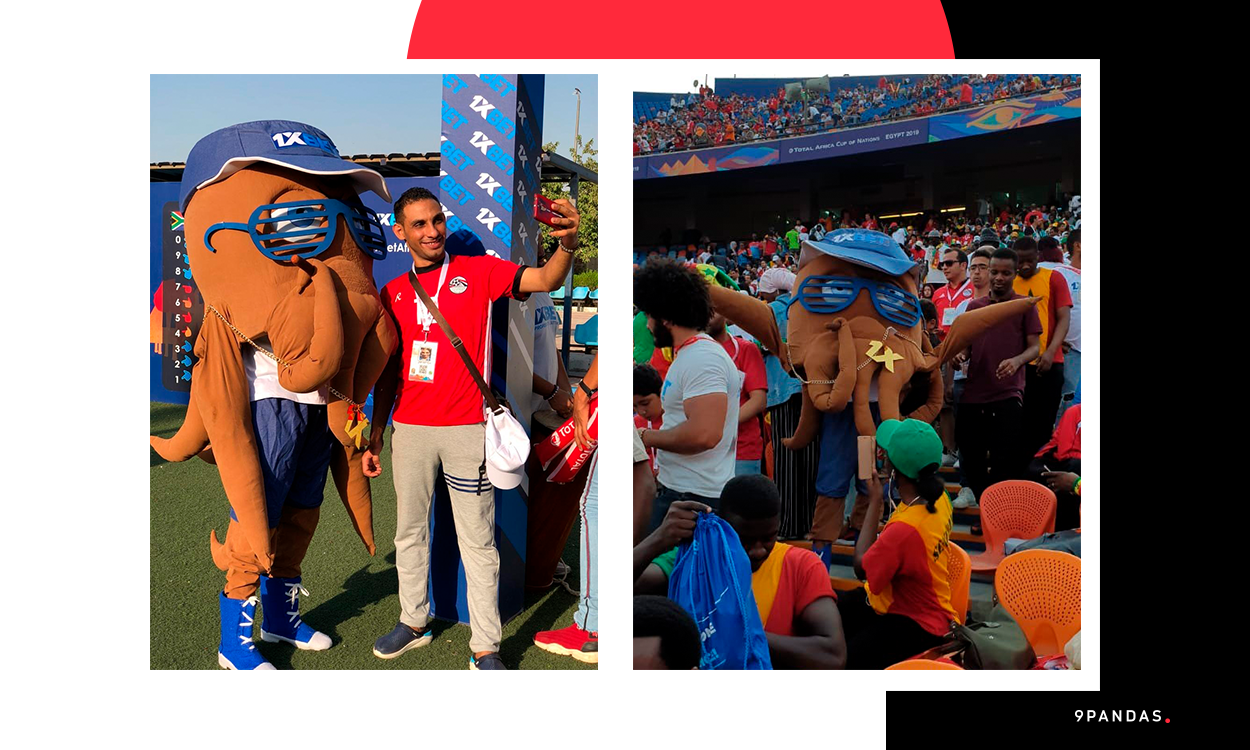 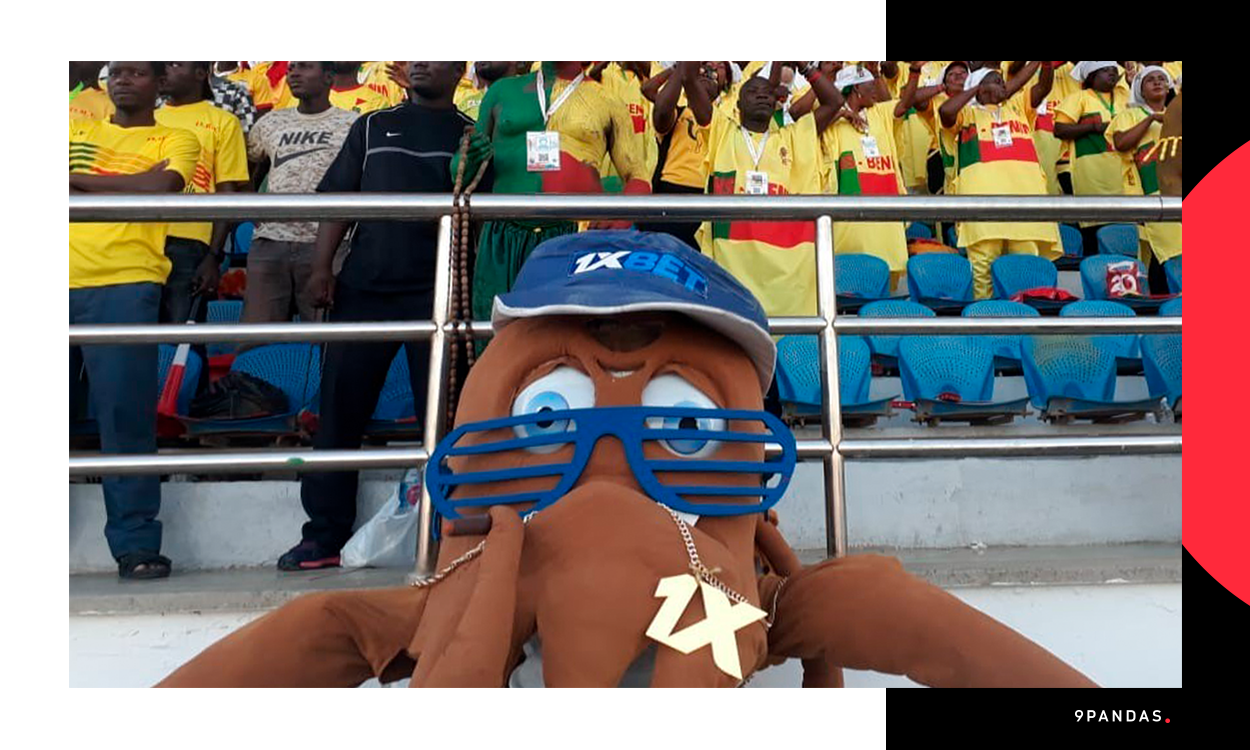 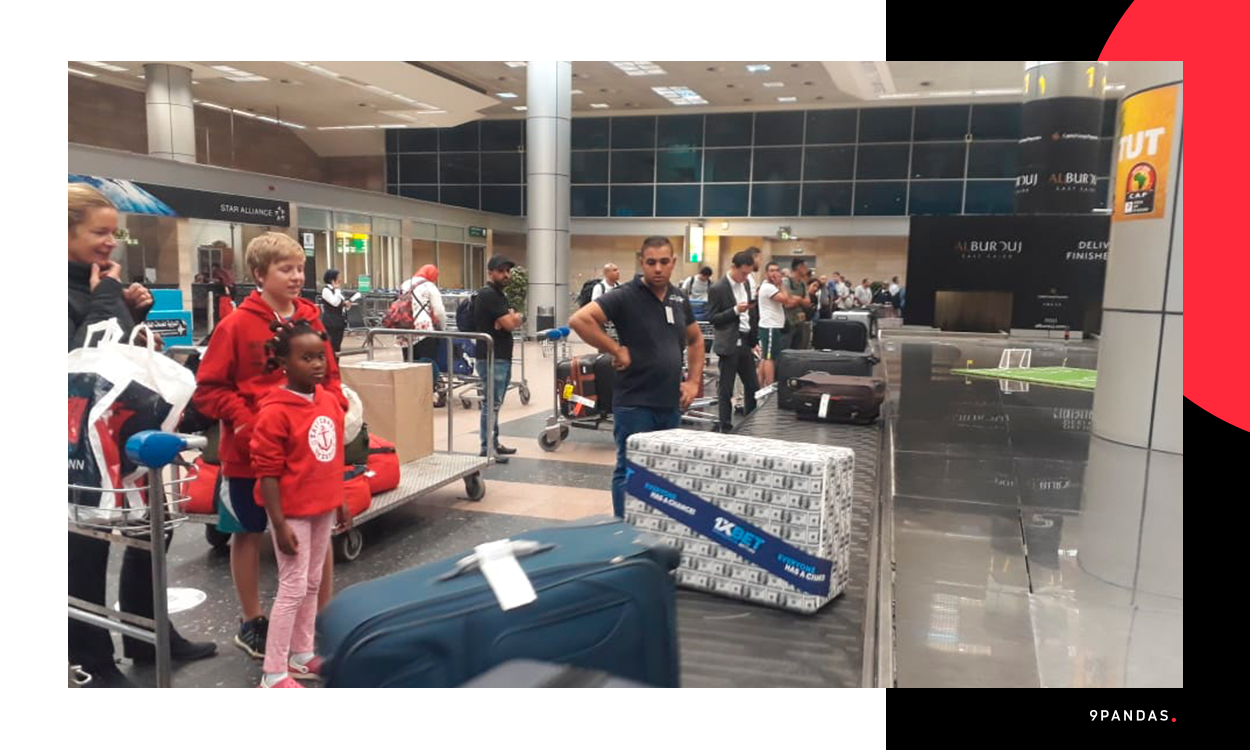